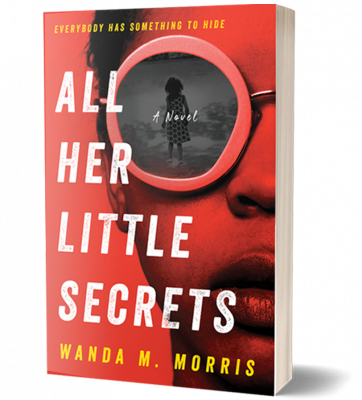 ALL HER LITTLE SECRETS

When Ellice Littlejohn discovers her boss dead in his office, she calmly walks away instead of calling the authorities.

Because she has been keeping a cache of dark secrets including a small-town past and a kid brother who’s spent time on the other side of the law.

A rapid promotion to the executive suite lands Ellice right in the middle of a shady deal inside the company. Suddenly, Ellice’s past and present lives collide as she launches into a pulse-pounding race to protect the brother she tried to save years ago and stop a conspiracy far more sinister than she could have ever imagined.

“Tense, taut, and relentlessly suspenseful, Wanda Morris’s riproaring debut ALL HER LITTLE SECRETS delivers full-throttle twists reminiscent of The Firm with the winning characters and nuanced social justice commentary of an Attica Locke. A paranoid legal thriller with a wrenching family drama at its heart, ALL HER LITTLE SECRETS plumbs the depths of American racism and greed as it asks whether one woman, however righteous, can outrun her–or our country’s–past. Wanda Morris is the sharpest new voice in legal thrillers today. I’m hooked.”
— Amy Gentry, bestselling author of Bad Habits and Good as Gone